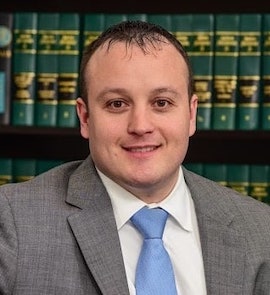 Mr. Poe is a Personal Injury and Workers’ Compensation Attorney that is known for fighting for his clients to get the results they deserve. Mr. Poe began his career working in the construction industry, assisting in the construction of newly built homes throughout Maryland. Mr. Poe enlisted in the United States Marines Corps in 2000. He completed bootcamp in Parris Island, South Carolina, and then was stationed in Twentynine Palms, California. There, he was assigned to the First Marine Division, Third Battalion Eleventh Marines Regiment, where he served in an artillery unit.

Mr. Poe was deployed overseas in January of 2003 in support of Operation Iraqi Freedom. Mr. Poe received numerous awards and recognitions from his time in the Marines and while overseas, including the Combat Action Ribbon.

After completing his four-year enlistment in the Marines, Mr. Poe began his higher education, graduating with Honors from the University of California, Berkeley. Mr. Poe received his Bachelors Degree with a major in Legal Studies. Thereafter, Mr. Poe returned to his home State of Maryland where he began Law School at the University of Maryland, Baltimore, graduating in June of 2012.

Mr. Poe specializes in injury claims and workers' compensation claims throughout Maryland, the District of Columbia and Virginia. Please contact Mr. Poe for a free consultation and hire someone to put up the fight you deserve.

Contact Us
Practice Areas
Client Reviews
★★★★★
"Mr, Poe was easy to work with, and fast to respond to any inquiries I had. He made my case easy to get through, and professionally handled any hurdles encountered along the way. I would definitely use Mr. Poe again, and recommend him to anyone going through a worker's comp case, as I was." Kyle
★★★★★
"Shawn Poe is honest and fair. I like that he helped me in a way that cost me the least amount of money. Plus, he is good a settlement s and negotiations. Great firm, great lawyer." John
★★★★★
"I have personally used Shawn more then once. Class act firm with wonderful customer service." Trevor
View More
Submit a Law Firm Client Review